After 2,5 years of searching, preperations, mailing, calling and collecting the right documentation we can finally announce our plans for the "Handsome Friends B-Litter".

We want to mate Koh I Noor by Champion Merry Go Round Mach Ten "Boomer". It was difficult for us to find the right male because we think there is too much linebreeding in the Dalmatian. For our B-litter we want to create some space in the bloodlines but we want a male that fits in the Dalmatian breedstandard and suffices on our demands of a stud dog. We think we found the right male in Boomer. We hope the combination with Koh I Noor will turn out great.

Because Boomer is enjoying his retirement in Brasil we will use frozen semen of him. Very exciting, because the chances of success are much lower with frozen semen. We already tried it in 2013, but sadly Koh I Noor didn't get pregnant then. We don't want to give up our dream after one shot so we are happy we have the opportunity to try it once more.

What a judge once said about Boomer in an intervieuw:

In your opinion, what is the best dog you have judged to date?

Wow, that's tough. I have had quite a few what I call "goosebump" dogs that just leave an imprint of your life. One such dog was the Dalmatian Ch. Merry Go Round Mach Ten which I awarded Best In Show to at the 2006 Rose City Classic in Portland, Oregon.

Click for a video of Boomer winning Best Of Breed 9and later Best In Group) at Westminster: 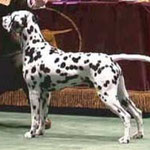 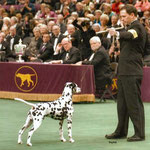 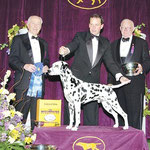 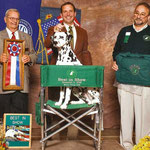 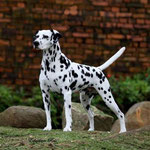